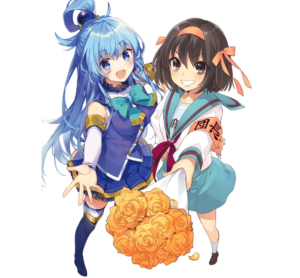 During tea break time, Asahina-san refilled everyone’s teacups again, allowing me to feel at ease. Let’s hurry up and deal with the last three phenomena already.

Koizumi put down his teacup and picked up Miss Mystery Society’s report.

“How about a never-opened door? It’s a door somewhere in the school that cannot be opened no matter what you do.”

Deciding on the location doesn’t seem to be a problem.

“Yes, there is no such door currently, so we can just say that it exists somewhere.”

So why doesn’t it open? Has it been worn down by the weather, or is it nailed shut?

“It is not quite satisfactory for the door to be too conspicuous. How about a toilet cubicle that’s always locked? Toilet-related supernatural tales are also part of the orthodox set, after all.”

A never-opened toilet door, you say? Toilet cubicles have some gap at the top, however, so it’s entirely possible for someone to forcefully clamber up and into the cubicle.

“Nothing happens to those people who enter through methods other than using the door, but there are some moments when the usually heavily locked door is unlocked. People who unwittingly enter the cubicle during that time will disappear, and that is why the door is never-opened.”

Where do those disappeared people go?

Over there, the person meets a purposeful person from another world, gets caught in some trouble by some strange circumstances, and so begins a heroic epic tale in that world, complete with fateful encounters, farewells, friendship and love-hate relationships.

“Starting a seemingly unending story would be undesirable, so I would like the person to show up in a more normal place.”

A door that turns into a warp-zone, huh. Let’s settle this by having the person appear in the men’s toilet at Kitaguchi Station, since both locations are toilets.

“But that would undoubtedly be teleportation, and we cannot explain it away as something else. We need some place closer, so what about the cubicle next door? That way, it can probably be interpreted that the person entered the wrong cubicle by mistake.”

A C-Warp1? If that’s the case, it should also be fine for the subject to disappear and appear in the same location, right? The person does indeed disappear from this world for one or two seconds and his body will only appear to flicker briefly, but it is still definitely a mysterious physical phenomenon.

“That setting is possible, but don’t you think it’s a little too plain?”

You sure have a lot of complaints. However, you’re right that it seems lacking if we want it to satisfy Haruhi.

I placed a fist on my forehead and closed my eyes, when inspiration struck.

“I got it. At that point, the person can go to a parallel universe.”

Meaning that after the person opens the never-opened door, they are transported to a fantasy world and go through the adventure as a summoned being from start to end.

“What kind of adventure will they have?”

That depends on each transferred person, but whether it’s a journey of trials and tribulations, or if it’s a cakewalk, in the end after they’ve dealt with whatever problem, they are translated back to the original toilet cubicle.

Well, they could make use of some miraculous power. Since it’s a fantasy world, there must be some kind of god there who can send the person back.

“Would it also be possible with something obscure like the will of the world? Since there is one person missing from our world, the Providence of Nature, or also known as the Balance2, is thrown into disarray, so the power of the divine scales is put into motion to reverse the damage.”

Anything goes for that aspect. However, when that person returns, they must lose all of their memories of the parallel universe. Also, the scenario must be such that no matter how long the adventure takes in the other world, only one hour has passed in the real world.

I’ll leave that to you, then.

“What do we do about their clothes? If the person changed clothes in the other world, they would probably be extremely puzzled when they see themselves in some strange outfit when they return.”

Let them be puzzled, then.

Asahina-san let out a small sigh.

I didn’t expect her to say something so solemn.

“It’ll be fine, Asahina-san,” I improvised. “When the sequel is written, the traveler will be transported to the other world again, be reunited with his old comrades and remember everything that happened.”

“Really? What a relief!”

A smile appeared on Asahina-san’s face, like a windflower turning into a Japanese iris.

“If it’s possible, I would like to end it with the second work,” Koizumi responded with a wry smile. “But then it would probably spill over to the third work.”

As he spoke, he started documenting the story.

The Never-Opened Door of a Certain Toilet3 – There exists a cubicle in a toilet somewhere in the school which has a never-opened door that is constantly locked. In the dead of a night with a sixteen-day-old moon, a person who opened the door is transported to a different world, in which they live in for two months. However, on their return, they find that only one hour has passed in the real world, and they also lose all their memories of the other world. Details to be discussed. Possible continuation.

I noticed that Nagato, who was still reading silently alone, was already on the fourth book of the horror story series for children.